Interview in The Indian Republic by Shaumik Samar Ghosh 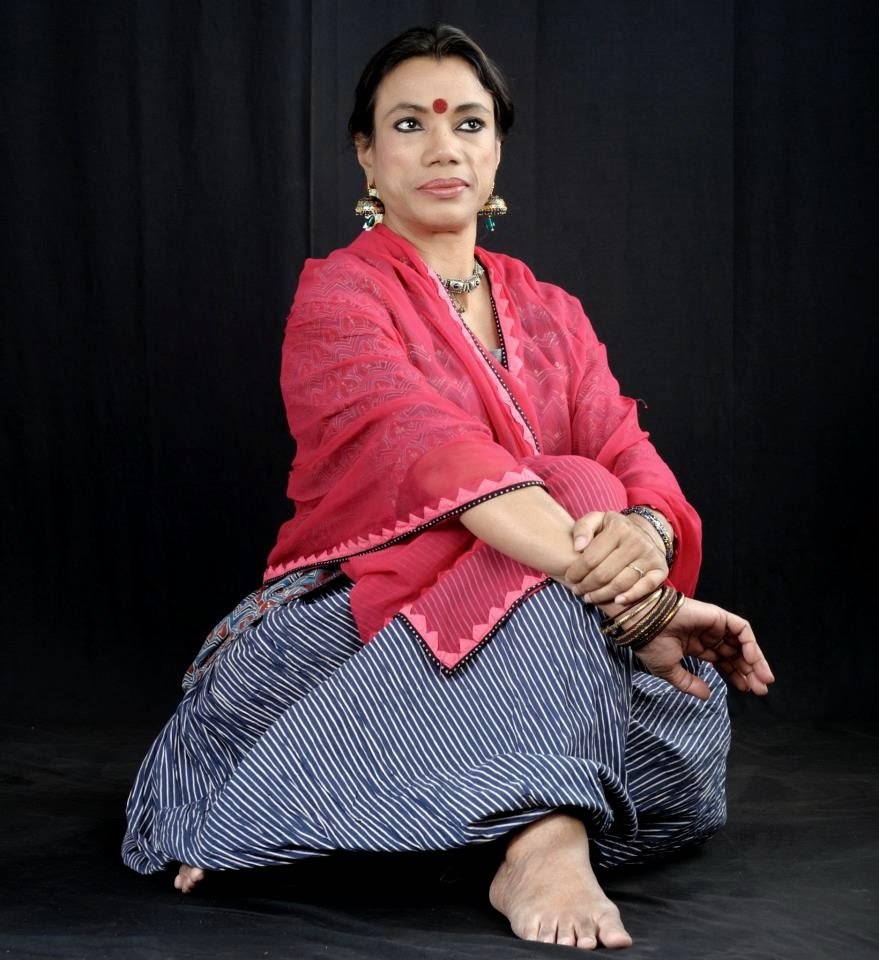 Vibha Rani is a doyen of Maithili theatre. She acts, sings writes poetry and enthralls her audiences with her spontaneous and powerful performances. In an exclusive interview with TIR, Vibha talks about the tribulations of being a committed theatre artist and what future does she see for Maithili literature and art in India.
A winner of several awards for her literary/theatrical/social contribution in Maithili and Hindi theatre; some of her achievements include The Katha Award, Ghanshyamdas Saraf Sahitya Samman, Dr. Maheshwari Singh ‘Mahesh’ Sarvottam Sahitya Samman, Mohan Rakesh Samman Woman Achiever Award, Best Suggestions Award, 1st Rajiv Saraswat Samman, 1st Ladli Media Award-2009 for her satirical blog-writing, 1st Vyangya Rachnakar Samman, Bhopal, 2009, Sahityasevi Samman, Chennai, 2011, Best female Actor Award, 2013, Vishnudas Bhave Samman, 2011 and more.
The Indian Republic:  Vibha, we would like to know a bit more about you. You are a singer, actor, poet, playwright, dramatist; all rolled in one. How did your journey begin? When did you start your group AVITOKO and where are you heading?
Vibha:

However, my theatre travelogue will not complete without naming my director duo, who not only refined the actor within me, but also extended their immense faith in me. Whatever I am today, the credit goes to them only. They are Sri RS Vikal, with whom I had worked in 1986 in Delhi and now since 2007 in Mumbai. Another director is Mr. Bombay Kannan, who directed my 4 solo plays during my Chennai stay from 2010-13. He directed not only mythology based plays, “Main Krishna Krishn Ki “and “Ek Nayi Menka”, but also directed “Bimb-Pratibimb” which has a strong flavour of dialectical Hindi and “Bhikharin” a grand mixture of Bangla and Hindi. Ironically, he does not know Hindi and I am illiterate in Tamil. But as it’s said that theatre has no vocal language and at the same time, theatre has its own language. My other director Sri Rajendra Joshi has directed my Maithili play “Naurangi Natni”, who himself is a Marathi speaking man and does not know Maithili at all. I always admire Subodh Poddar, who always shaped me in my dance steps for “Naurangi Natni” and accent, Robindro Sangeet and costume for my solo “Bhikharin”.  Harsh Prasad had directed my English solo play “Life is not a Dream”, which was opened in Finland and had several shows in Mumbai. Manjul Bharadwaj had awakened my playwright urge. These are my real idols, whom I admire and respect from the bottom of my heart.
The Indian Republic: Your plays Bimb-Pratibimb and Naurangi Natini are stories about the plight of women in rural India, while Aao Tanik Prem Karein and Ek Nayi Menka have a more romantic and social storyline. Do you consciously choose the kind of plays you want to do?
Vibha: I choose content and situations, which appeal to me. Upon seeing social injustice, I become very restless. But, I cannot take law and order in my own hands. My media of expressions are writing, theatre, training and interaction. Bimb-Pratibimb is a story of 3 women, caught under the odd situations of widowhood and divorce. This is not only a saga of a village woman, but is a trap of social stigma. Women, whether they are educated or not, rich or poor, from village or from the town, finally, they are just women. You will appreciate that widowhood is a destiny. Any woman would not like to become widow or be called a divorcee. But since our society has labelled women as a soul responsible for maintaining the long life of their husbands, they start cursing women for the unfortunate death of her husband. Not only this, they are deprived of the basic facilities.
All my stories or plays have a social and contemporary storyline. Even, if I deal with mythology, then also contemporary aspects have to be there. Naurangi Natni deals the anger of common man against the system. “Ek Nayi Menka” starts, from where Menka and the Vishvamitr story stopped in our mythology. Here, the woman’s voice is very strong.
The Indian Republic: According to you, what is the real essence of a good artist? Is art an in-born talent or can it be learnt even later in life from teachers?
Vibha: To my mind, the real essence of a good artist is “What I want to do?” I don’t believe in in-born talent. I believe in practice, Riyaz. I also believe that there is no age for any kind of creativity. But yes, Learning and riyaz is the mool mantra of success. Of course, there is a very vital role of a teacher and institutions. It saves your time and efforts. You get a structural training. Self teaching sometimes takes your full life. But teacher and institutions are just like a torch. Pupils or disciples have to move ahead and to create their own path.
The Indian Republic: Any note of advice to the young theatre aspirants?
Vibha: Believe in yourself. Be ready for hard work. Do practice regularly. You may be a full timer theatre practitioner or not, but you will have to be a full time learner all 24×7. Never be over confident. People see the success of big names. But they simply forget to see their hard work. They get neglected, rejected in their primary days. Humanity is an essential aspect of success.

Shaumik Ghosh,has been working with the media as a journalist and writer since the last 12 years. He enjoys writing, observing social trends, pop culture, doing interviews and travelling. He is presently in the process of developing 2 documentary stories and hopes to finish them in time.
- See more at: http://www.theindianrepublic.com/lifestyle/entertainment/meet-vibha-rani-doyen-maithili-theatre-100050716.html#sthash.GxiSePGQ.dpuf
Posted by Vibha Rani at 9:41 PM