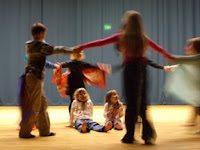 Theatrical presentation by kids of finland

No language, only action, only emotions, only drama, only dramatic graphs! If there were a few words, such as ‘Aaitii’ (mother), ‘Rotta’ (rat) and that also in Finnish. And result was in the form of a good, effective and communicative presentation by the school children of Finland. They were between the age group of 4-12 years. The presentation was made on September 30, 2007, during the festival of ‘COLOR OF INDIA’ an annual celebration by Aarambh, a Finland based non-profit organization. Before that, the same was presented on September 29, 2007 before a good gathering of enthusiastic parents as well as the teachers of the school.

Since the children don’t know English, it was quite challenging to get into them into any theatrical presentation. But accepting new challenges are always a big challenge for AVITOKO, wchich was handled successfully.

Based on the story of an Indian folk tale, the kids were given physical actions, body language, mind space to think, organize, reorganize the content through the physical excercises and meditation. It was not in a syllabus form, but in the form of learning with fun. With the movements of their body and expressions, they expressed the theme in a quite well manner.
‘It is necessary to put their mind, heart and soul with the rythm of their body, but should not be a task for children, otherwise they will loose their interest.’ Says, Vibha Rani, Honorary and Founder Secretary of AVITOKO, under whose guidance, the kids presented their shows.
Posted by Vibha Rani at 11:11 AM