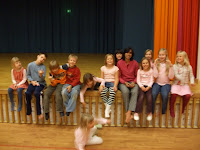 THEATRE workshop with the kids of Finland।
After conducting several numbes of theatre and art workshos for varied class of kids in various parts of India, AVITOKO is reaching now to Finland, an Scandenavian country to conduct a theatre workshop for its children from September 24-28, 2007.
Through its philosophy of RANG JEEVAN (Art & Theatre for Life), AVITOKO believes that theatre, art, literature, culture are strong opportunities for expressing one’s creative spirirt and self expression and at the same time, vanishes inhibitions of people too. At the same time, AVITOKO needs to emphasises its concept of ‘Learning through Fun’
In its 5 days, theatre workshop, the kids will be given an opportunity to learn voice modulation, behavioralpatterns for group and self, different theatrical lessions, physical activities, different games, yoga as well as meditation। The workshop will be conducted by Vibha Rani, Honorary Secretary of AVITOKO.
And kids opened their wings like birds… अवितोको' की 5 day theatre workshop for the kids of Stiener School, Espoo, Finland. This school itself works in a very innovative manner and believes teaching to kids in a non- conventional method, where children are allowed to learn any thing as per their choice.
In day 1, kids were given a lesson of forming the group by the games of clapping and making circle followed by other physical activities. These activities erased inhibitions and hesitations among kids and they became open. By nature, Finnish people are a little shy and so the kids too. Opening up excercises had removed their hesitation and they stated behavibg in more open manner. The last step was meditation. It affected their minds and soul so beautifully, that every day they kept asking, when we will go for meditation. Some other kids joined the group after lisning from their frinds that the activities of workshop are very interesting.
In day 3, inputes based on an Indian folk tale on ‘Self Help:Best Help’ was given along with the action related with the story, which kids picked up very fast. In spite of language barriers, they learnt every thing in a very professional way. It made AVITOKO’s belief stronger that theatre has its own language and spoken language becomes meaningless, while interacting in theatre language.
On day 4 & 5, they exercised on this quite well and polished it alon with other exercises based on voice, group, self, theatre techniques etc.
During all 5 days, Kids enjoyed this workshop in a manner that they were waiting eaerly to start this workshop and never wanted to leave the place.
Posted by Vibha Rani at 12:15 PM