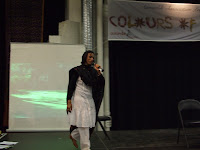 Monologue by Vibha Rani in ‘COLOR of इंडिया', Finland.

AVITOKO had participated in COLOR OF INDIA, 2007, a festival organized by ‘Aarambh’, a Finland based organization, through a monologue play "Life is not a Dream" by Mrs. Vibha Rani. Vibha Rani is - A writer & playwright of Maithili & Hindi, social activist, theater actor, believing in self & others and wishing a better world tomorrow. She is also the Founding Secreatry of AVITOKO and established Hindi & Maithili writer. Theatrical Presentation by children of Steiner School and exhibition of work of art by ‘special’ group of people were also presented during the festival and gained a great applaud from the audience.
theme of the monologue "Life is not a Dream" is an age old dilemma of an Indian woman, who has been considered as a home maker, service provider, care taker of the family, children and reliever from all the pains and grief of the family, but she has not been given a preference and freedom to lead her life in her own way and wishes। Failed to get her own identity in her own home, she finally leaves it।
Written and acted by Vibha Rani, the monologue "Life is not a Dream" has been directed by Mr। Harsha Prasad, a well known theatre actor and director.
Before this, Vibha Rani has acted in several plays, such as ‘Dularibai’, ‘Savdhaan Pururva’. ‘Poster’ ‘Boodhe Putron kii javaan maan’ ‘kasaibadaa’ etc. Her recent historical play is ‘Mr. jinnah’, Founder and the first Governer General of Pakistan), where she had performed the role of Fatima, sister of Mr Jinnah, who had lead a major role to form Pakistan.

AVITOKO is an Organisation, passionate towards a Better World Tomorrow, works with a varied class of society striving to turn their dreams into reality through Theatre, Art, Culture, Education, Training, Women & children welfare, publication.
With ‘Pehchaan’, AVITOKO strives to introduce 'special' children and prison inmates to their own inner strengths hidden within their dark existence.
Posted by Vibha Rani at 10:31 AM